The Inspiring Story of DeeDee Jonrowe

DeeDee Jonrowe is one of the most prominent figures in the history of the Iditarod trail sled dog race. She competed in the Iditarod a total of 32 times, and managed to finish on 29 occasions. She was awarded the Most Inspirational Musher Award twice, in 1993 and 2003 – on the latter occasion, only three weeks after completing chemotherapy for breast cancer.

Jonrowe has never crossed the finish line in first position in the Iditarod, but she achieved three second places in 1993, 1996, and 1998. To this day, she continues to be one of the most memorable athletes of dog mushing. In this article, we’ll take a look at her early life, Iditarod entries, and her inspiring story of competing in the Iditarod despite breast cancer.

DeeDee Jonrowe (born DeeDee Stout) is the daughter of a US Army officer and was born on December 20, 1953, in Frankfurt, Germany. Jonrowe moved to Alaska when she was 17 from Virginia. At first, she didn’t want the move and thought there wasn’t anything fun to do in Alaska due to the cold weather and wanted to leave the state as soon as possible. Some time after moving to Alaska – in her own words, Jonrowe explained that she “was so in love with the adventure and freedom of the state of Alaska that I never really ever considered leaving again”.

In 1974, Jonrowe started working for the Alaska Department of Fish and Game after finishing her bachelor’s in Biological Sciences and Renewable Resources from the University of Alaska Fairbanks. She met her now-husband Mike Jonrowe at work, and the couple got married in 1977. While working as a Fishery Biologist for the department, she grew interested in dog mushing. Jonrowe spent lots of time with sled-pulling dogs on the weekends and evenings when she came home from work. As an outgoing person who loved the outdoors, Jonrowe decided to quit her job at the agency to pursue other opportunities because her work started to require more time in the office than out in the field.

In 1983, she operated her own fishing boat in Bristol Bay and North Sound. Jonrowe believes that much of her success in the Iditarod is thanks to the time spent in these jobs. 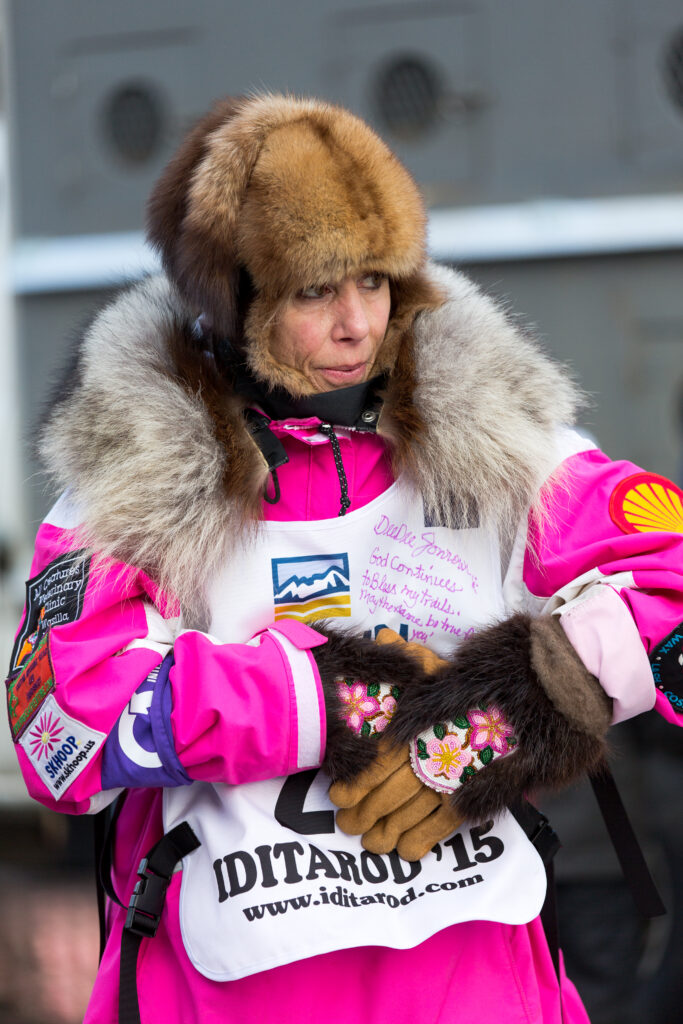 In 1996, a car accident killed her grandmother, hospitalizing Jonrowe and her husband. Notwithstanding the injuries, she continued training and preparing her dogs for the Iditarod 1997, where she finished the race in 4th place. In 1998, the following year, she completed the Iditarod once again in 3rd place for the third time. During the 1999 Iditarod, her dogs refused to pull due to a strong headwind, and she scratched, meaning she pulled out from the race by her own choice.

These minor setbacks did not bring her down, and she currently holds the fastest time recorded for a woman for her 1998 finish in 9 days, 8 hours, and 26 minutes.

Overcoming breast cancer and the 2003 Iditarod

Jonrowe overcame adversity to continue competing in the Iditarod amid her tragic life events, but a bigger challenge was awaiting her down the road. In the summer of 2002, she was diagnosed with breast cancer. She underwent extensive surgery and chemotherapy that took a toll on her health. Despite her health condition, she decided to compete in the 2003 Iditarod. Only weeks before the race began, she received her last dose of chemotherapy, and with her friends training her sled dog team before the race, Jonrowe was standing ready at the starting line in Anchorage.

As her body was recovering from the treatment, it was noted that Jonrowe ran the race to heal her spirit and mind. Her bravery and love for the sport were cheered by many. She crossed the line in Nome after 10 days and 23 hours, putting her at 18th place. Her inspiring story titled her the honorary chair of the American Cancer Society’s Relay for Life and she also received the Most Inspirational Musher Award, given to her by other mushers in the Iditarod.

One year after the 2003 Iditarod, Jonrowe spoke to Women Warriors, saying, “I’ve had back surgery, frozen my shoulder, broken my hand. I think I’ve had every single cold-related injury. I haven’t had any amputations, but I’ve had severe frostbite on my fingers, cheeks, and nose. I even frostbit my corneas some years ago.”

The trauma from the car accident, dog mutiny, the many injuries she sustained, and even cancer couldn’t bring her down. It almost seems as every setback life has given her was a source of motivation and drive to push herself even more. During her participation in the Iditarod, she also won four awards other than the Most Inspirational Musher Award. These awards include Sportsmanship Award in 1981, Halfway Award and Humanitarian Award in 1991, and Joe Redington, Sr. Award in 1997.

What DeeDee Jonrowe is up to currently

After the 2003 Iditarod, she continued taking part in the sport. In fact, from 1987 to 2014, there wasn’t a year when Jonrowe didn’t participate in the Iditarod. This alone shows her love and passion for sport and sled dogs.

Unfortunately, Jonrowe’s home, along with her dog kennel, several pets, and a flock of chickens, were destroyed by the Sockeye wildfire in 2016. Fast forward to today, and Jonrowe has rebuilt their family home with her husband, and she is still operating a kennel to this day. Although she’s not actively racing in the Iditarod, she still runs occasionally but does it for the joy of it, not for competitive reasons.