Who Was The First Woman To Win The Iditarod?

Libby Riddles was the first woman to win the Iditarod 1,000-mile sled dog race. An Alaska resident for over 40 years, Riddles won the Iditarod in 1985 and made a notable impact in the sport, inspiring women across the globe to compete in the grueling race. Her victory had a huge influence on the sport of mushing – and inspired t-shirts bearing the slogan, ‘Alaska: Where men and women win the Iditarod’.

After winning the Iditarod, Libby Riddles gained fame and notoriety. Riddles was praised as a woman of courage and spirit.

However, before winning the Iditarod, she had to work extremely hard to have the team of dogs that would eventually help secure her victory.

Libby Riddles was born in Madison, Wisconsin, on April 1, 1956. In 1973, just days before her 17th birthday, she moved to Alaska. She saw a sprint race – a short distance race of sled dogs spanning between 4 to 100 miles – and fell in love with mushing on the spot.

She started racing at the age of 22 and won her first-ever race, the Clines Mini Mart Sprint Race, in 1978. It took her two years to compete in the Iditarod trail sled dog race after winning the sprint race. She finished in 18th place in 1980 and 20th place in 1981.

Riddles was determined to win the Iditarod and decided to breed her own sled dogs. She moved to Shaktoolik, Alaska, a small Eskimo village inhabited by 300 people and started to breed her sled dogs. After moving to Shaktoolik and working as a fish seller for a short while, Libby Riddles moved to Teller, Alaska, where she met her partner, Joe Garnie.

In Teller, she started working closely with Garnie, breeding and training dogs. During this period, she didn’t compete in the Iditarod or other sled dog races. She patiently bred and trained dogs to put up the best team of sled dogs in her quest to win her the Iditarod.

After three years of breeding and training dogs, Riddles entered the 1985 Iditarod. She was racing against “big sponsored teams”, as she recalled in an interview with Princess Cruises, and described herself as being a total unknown to other mushers.

Although she competed in the 1980 and 1981 Iditarod, the number of teams that competed for a year or two and never returned to compete is too many to count. It was normal for many racers and fans of the race to not know her. She was racing against many experienced mushers and the four-times winner by the 1985 Iditarod, Rick Swenson. Swenson would go on to win the Iditarod again in 1991.

Libby Riddles was the first musher to arrive in Unalakleet, about 268 miles shy from Nome. After resting for 24 hours in Unalakleet, it was her time to leave the city. Before leaving Unalakleet, she did a brief interview with the CBS reporters, stating, “I’m taking a chance going out this morning and this kind of weather might be kind of tough on my leaders but right now, I’m at the point where I gotta either take a chance or to heck with it, gotta do it.” and took off early in the morning.

Piercing through a storm from Shaktoolik to Koyuk

By the afternoon of the same day, she got herself a six-hour lead and arrived in Shaktoolik. 229 miles away from Nome. The strong winds were causing ground blizzards where the visibility was dropping significantly. Since waiting out the storm could mean losing her lead, Riddles decided to keep going in the storm. She took on the seemingly impossible by heading out in the storm. This was a challenge no other musher had to face until that point in the race. The blowing snow was not only affecting her vision but her dogs as well. When the visibility was virtually zero, she spent an uneasy night in her sled bag and waited for the morning.

Seeing the storm calming and visibility improving as an opportunity, she began mushing again. Just 20 miles behind her, John Cooper and Dewey Halverson were forced to stop due to the whirling snow icing the fur around their dogs’ eyes. The storm passed by Libby Riddles and she was cleared to follow the track.

She arrived in Koyuk, only 171 miles away from Nome and she described her journey from Shaktoolik from Koyuk as “the stupidest thing I’ve ever done but I didn’t think about turning back.” This decision of leaving Shaktoolik to Koyuk during a blizzard was her Alaska Sports Hall of Fame moment.

After resting in Koyuk, she left the city for White Mountain where she would have only 77 miles to mush before reaching Nome. Both she and the dogs were exhausted once she arrived in White Mountain. Saying to her dogs, “last haul guys”, she took off for Nome. Both Cooper and Halverson were five hours away from Koyuk when she left the city. With the improved weather conditions, she was now closer to winning the race than the other mushers. The crowds were already gathering at the finish line in Nome to become a part of history, preparing to welcome Libby Riddles, the first woman to win the Iditarod. She finished the 1985 Iditarod in first place following 18 days, 20 minutes, and 17 seconds from the start. 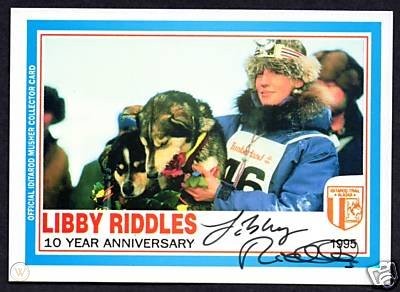 Since winning the Iditarod

Libby Riddles’ victory of the 1985 Iditarod gave her instant recognition. She was celebrated as the first lady of Alaska. After winning the race, she decided to live like an Alaskan native for six years. Although she didn’t win another Iditarod sled dog race, she made history by being the first woman ever to win the race.

Riddles became a professional speaker after the 1985 Iditarod and appeared in multiple events. She gives speeches every year to Princess Cruises passengers in Alaska.

Her victory was added to the Alaska Sports Hall of Fame moments in 2007. Libby Riddles stays as one of the most influential figures of the Iditarod trail sled dog race. She still has a passion for sled dogs and has over 20 pups. Even though she doesn’t race anymore, she runs her dogs every winter.

You can learn more about Libby Riddles by visiting her website, libbyriddles.com.